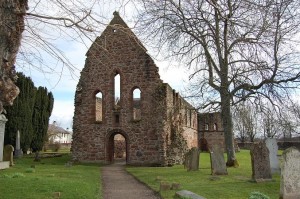 The Beauly Priory is believed to have be founded in 1230 by the Valliscaulian order, a religious order of monks from the Roman Catholic Church who’s first monastery was founded in Burgundy France at the end of the twelfth century. In all three priories were founded by the Vallisculian order in Scotland.The reclusive french monks referred to Beauly as Prioratus de Bello Loco Latin for “Priory of the Lovely Spot”  The name Beauly, is believed to come from the French beau lieu or “beautiful place” By 1510 the Valliscaulian order had been replaced by the Cistercian order by order of the pope.

Sadly the Priory was dismantled and left to in ruin during the Reformation of the 16th century. Around 1634 the lead was stripped from the roof and some of the stone work was dismantled and used locally, while some was taken to Inverness for the construction of  Oliver Cromwell’s citadel in 1652. Although in ruin the main walls of the Priory still stands with the intact mausoleum of Sir Kenneth MacKenzie of Kintail 7th Clan Chief of the Clan MacKenzie who died on the 7th of February 1492. Kenneth MacKenzie of Kintail had lands stretching from the shores of the Beauly Firth to the foothills of Strathpeffer and resided in one of Scotlands oldest inhabited houses Redcastle. The Castle ruin and remains stayed with the Clan MacKenzie until 1790. Kenneth was nicknamed Coinneach a’bhlair “Kenneth of the Battle” Around 1485 and 1491 Kenneth with a force of MacKenzies  defeated Islander Gillespick MacDonald and his MacDonald men many drowning in the river connan at the Battle of Blar Na Pairce. ” Battle of the Park”

Today the Priory stands peacefully by the river Beauly guarded by the 800 year old elm tree “believed to be the oldest in Europe. If only it could talk what tales it could tell.